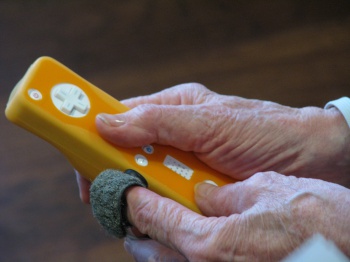 A recent study finds that seniors who play videogames report a better sense of well-being.

Senior citizens, that is, people over 60, have traditionally been one of the smallest videogame markets. New research from the North Carolina State University suggests that maybe they should put down the bingo pen and pick up the wiimote, finding that older adults who play videogames report higher levels of emotional well-being. Those who do not play videogames report more negative emotions and a tendency toward higher levels of depression.

Both the regular and occasional gamers reported much higher levels of emotional and social well-being than those seniors who did not play games at all. The sample size is still a bit too small to be jumping to any solid conclusions, but it does show a clear correlation. The people involved are looking to further their research with more studies on the effects of videogames on older adults.

"The research published here suggests that there a link between gaming and better well-being and emotional functioning," says Dr. Jason Allaire in a press release. Allaire is the lead author of the paper describing the study and an associate professor of psychology at NC State. "We are currently planning studies to determine whether playing digital games actually improves mental health in older adults."

So, if you think your poor old grandma is feeling depressed, don't buy her flowers or knitting needles, buy her a DS instead.