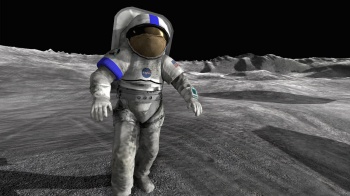 NASA wants to teach you the power of the Dark Side (of the moon).

Space is, as every trekkie knows, the final frontier. It's vast and full of mystery, and we are doing very little to explore it. NASA is disappointed in the lack of enthusiasm towards extraplanetary excursions, and now the organization is turning to game developers to help raise interest in the space program. To that end, game makers are invited to participate in the Dark Side of the Jam, a 48-hour game jam with a mission to create fun, educational games about space.

The jam (which, unfortunately, is unrelated to Pink Floyd or the Looney Tunes movie) begins tonight, kicking off a weekend of design, development, and sleep deprivation. While NASA does want to capture the wonder and intrigue of space, the results of the jam are intended to be more or less realistic - the hope is that players should be excited about the realities of the space program, as opposed to pure science fiction. Sins of a Solar Empire probably wouldn't fit the bill, for example, but look out for simulation-style toyboxes like Kerbal Space Program. NASA itself has already dabbled in game development with its free 2010 game Moonbase Alpha, which challenged players to maintain a somewhat-realistic lunar colony.

Interested teams of developers are invited to utilize the facilities at NASA's own Ames research facility in Mountain View, California, though a number of satellite locations (heh) are also hosting jam sites elsewhere in the US, Canada, and Brazil. Teams will be equipped with a variety of authentic assets including photographs from astronauts and the Curiosity rover, game-ready textured models, audio files, and actual data from NASA spacecraft and simulations - all of which, by the way, can be accessed by the general public right now.

Many gamers scoff at educational games, but we're clearly willing to devote the effort: if the learning curve of EVE Online incorporated more realistic systems and modern technology, we'd probably have a million self-trained NASA technicians ready for employment right now. With any luck, the weekend will produce enough fun and interesting games to at least garner a little more support for the organization. Because seriously - space is really cool.