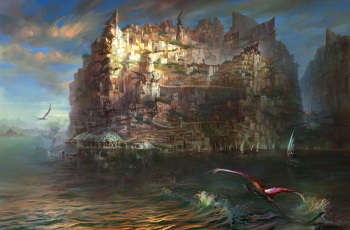 Torment: Tides of Numemera has set a new mark in the sprint to $1 million in Kickstarter funding.

As a fan of PC gaming and RPGs, it pleased me greatly to see inXile's Torment: Tides of Numenera, the long-awaited follow-up to Planescape: Torment, come out of the Kickstarter gate so strongly. But I don't think even the most optimistic old-schooler expected that it would do quite as well as it's doing, because it's doing better than everything that's come before it. Torment blasted to the million-dollar-market in just seven hours and two minutes, well over an hour faster than the previous record holder, the Ouya game console, which reached $1 million in eight hours and 22 minutes.

Only 21 out of the more than 37,000 successfully-funded Kickstarters have achieved $1 million funding and with Torment, inXile now has two of them. But while Torment is a runaway success and looks sure to blow away the mark set by the Wasteland 2 Kickstarter, which drew more than $2.9 million in backing, inXile chief Brian Fargo said that before launching the Kickstarter there were serious concerns about pushing the crowdfunding button too hard.

"Even though this was our second Kickstarter campaign, we were very cautious in our expectations," Fargo said. "We knew there were some negative sentiments regarding crowdsourcing fatigue, and the fact that we are still finishing Wasteland 2, but the massive community acceptance to our latest Kickstarter effort was overwhelming, unexpected and a great honor."

With 28 days go, the Torment: Tides of Numenera Kickstarter has now broken the $2.1 million mark, and inXile is piling on the stretch goals. The studio has thus far added gender-selectable PCs, the addition of three new writers, two new areas, more music and a new companion; if funding reaches $2.5 million, another writer, gameplay area and companion will be added, plus what promises to be an amusing video from Colin McComb apologized for the Second Edition D&D Complete Book of Elves.