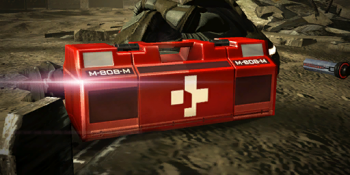 Veti-Gel is a functioning prototype that can instantly seal any wound.

As most of us are aware, the lives of the characters in Mass Effect aren't generally that straightforward. One aspect of their collective existence that is simple, however, is emergency medical treatment. If they're wounded by gunfire, aliens, trips, falls, vehicle crashes, you name it, they press a button and their body armor applies something called Medi-Gel to the wound to keep them going. Medi-Gel neatly cauterizes whatever ails the character and kickstarts the healing process, tiding them over until they can get to a space-hospital or what have you. And now, somebody in the real world has made a version of it that works on real flesh.

Dubbed Veti-Gel, the substance is basically, well, Mass Effect Medi-Gel. It is a synthetic version of the extracellular matrix (ECM) that holds our cells together and tells them what to do in the event of a bleeding injury, instructing them to get clotting. It also binds together with the damaged ECM cells of the patient, working with them to form a seal over the area of the wound. You can see a nauseating, blood-filled clip of the gel binding to part of a pig's liver and stopping bleeding right here [warning: lots and lots of blood].

The minds behind Veti-Gel (which is, oddly, sometimes referred to as Medi-Gel by the people who made it) are led by one Joe Landolina, a third-year student at NYU. "I have seen [Veti-Gel] close any size of wound that it is applied to," he said. "As long as you can cover it, it can close it...it looks like, feels like, and acts like skin."

Landolina has spent the past year conducting preliminary tests of the substance on rats, and claims to have used it to heal wounds several of humanity's rodent friends. He will publish a full record of his results, and tests comparing Veti-Gel to other on-market coagulants, later this summer. In the meantime, he says he's keen to get to work testing his invention out in the field with veterinarians and their patients.

So, if the Medi-, sorry, Veti-Gel actually does work, what are we talking about here? Landolina also claims that it heals second-degree burns in two days, but since his entire body of evidence for that was a story about how his buddy got burned and then applied the gel and was healed, it would perhaps be a better idea to hold fire on that one until it's been lab-tested. But that aside, well, this could be a revolution for emergency medical treatment and a hundred other forms of treatment besides. We await your published report with keen interest, Joe Landolina. And if you could change Veti-Gel's brand-name to something like Solus if it makes it to market, well, that would be lovely too.