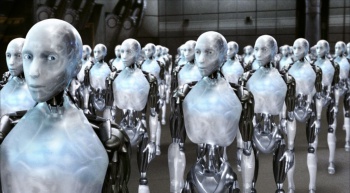 The collective, global robot brain of the future is just around the corner.

When thinking about a future where robots live alongside human beings, it helps to be practical. In that vein, the European RoboEarth Project has just launched a network called Rapyuta, which is a sort of wireless internet service designed specifically for the needs of robots that are feeling a little lost in our bewildering world.

Named after the home of the robots in Hayao Miyazaki's film Castle in the Sky, Rapyuta's primary function will be to allow robots of various stripes to search for information on objects and situations that they've never encountered before, including dialects of different languages, from anywhere in the world. It will cancel out the need for robots to form their own idiosyncratic images of the world, which will sadly halt any of their dreams of individuality but will, happily, allow them to work more efficiently.

Added to that, it will work as an online "brain" of sorts, carrying out complex computational tasks - folding a shirt, for instance - for a robotic platform remotely. Rapyuta's creators hope that these utilities will cut the cost of robotics dramatically (since the robots wouldn't have to drag their brains around with them) at the same time as allowing for better performance from our metallic companions. According to its technical head, Mohanarajah Gajamohan, the system will be most useful for self-driving cars, drones, and other platforms that need a lot of processing and move around in highly complicated environments.

Apart from its work on Rapyuta, Roboearth, a collaborative project run by five European nations, spends most of its time thinking of ways to standardize the operations of robots in the real world. Rapyuta is only the beginning; the group truly sees a world where robots live side-by-side with humans, and they're preparing the networks that those robots will use when they get here. Let's just hope they've got decent security software, yeah? (And before I go, anybody for tin-foil? I've got some nice tin-foil here, ready for use. It's the quality stuff, too, none of your supermarket-value-range nonsense. Preparation is critical.)