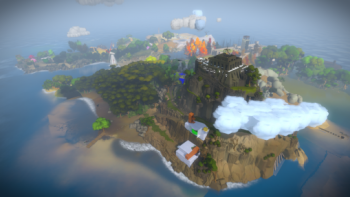 Last month's high-profile reveal of the PlayStation 4 featured a number of presentations from big-name publishers, as expected - every AAA developer wants a piece of the next generation of gaming hardware. One surprising speaker was Braid developer and indie VIP Jonathan Blow, who took the stage to promote his upcoming title The Witness and to announce that it would be a timed PlayStation exclusive. He recently sat down to elaborate on his decision to sign up with Sony, and why he's concerned about the direction Microsoft is taking the Xbox platform.

In the past, Blow had worked with Microsoft to distribute Braid, but he isn't eager to continue that partnership. The Xbox strives to be an all-encompassing media device, and if its unannounced successor continues to move its focus away from video games, Blow isn't sure he wants to be a part of it. "We do see the same leaks as everyone else has, and they seem plausible," Blow explained. "To me they talk about a console that is not strictly about games. It's trying to be a center of the living room device ... As a place to put the best, highest performing version of our game on, it doesn't seem as good a choice."

It isn't clear yet whether or not Blow's faith in the PS4 will pan out, but he's optimistic about his relationship with Sony. It's worth noting that while the console rivalry is still raging, The Witness is only exclusive to the PS4 in terms of dedicated gaming platforms, and Blow is still free to publish on PC and mobile devices alongside Sony's hardware. We're sure to hear more details about the game's availability as we near the PS4's holiday 2013 release window.