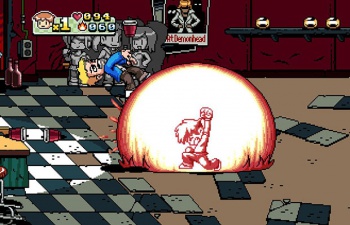 Two and a half years after it debuted on the Xbox Live Arcade and PlayStation Network, Scott Pilgrim Vs. The World: The Game will finally see online multiplayer thanks to a new DLC addition.

Scott Pilgrim Vs. The World: The Game made its debut on August 10, 2010. Ostensibly it was created as a promotional tie in for the then-current Scott Pilgrim movie adaptation. However, while most people have forgotten the film, the game continues to see sporadic downloadable content additions. The most recent one, which just went live on the PlayStation Network (and will presumably hit the Xbox Live Marketplace tomorrow), is perhaps the game's most important content update so far, as it allows players to enjoy the game's four-player beat 'em up action with friends over the Internet.

Of course, simply adding that feature to the game would be too simple and consumer-friendly. Instead, the online functionality is included as part of a new $5 DLC pack which also adds Scott's pal Wallace Wells to the game as a playable character. PlayStation Plus subscribers can buy the DLC for only $4 for the next two weeks, but regardless, there is an entry fee for this thing.

Is $5 too much to ask for a feature that arguably should have been in the game from the start and a minor supporting character being added to the title's playable roster? That's pretty subjective. If you're a huge fan of novel ways to punch dudes in the face, then yeah, that $5 is probably worth it. Likewise if you really, really want to play the game alongside someone far away, then $5 is a small price to pay for online functionality.

That said, Castle Crashers includes more characters, weapons, and online options than Scott Pilgrim Vs. The World: The Game, along with a more modern art style and very similar gameplay concepts. Not to dissuade you from playing the latter, as it's an excellent beat 'em up, but just know that if you'd rather not drop another $5 on what is essentially a dated movie tie-in, you do have other options.