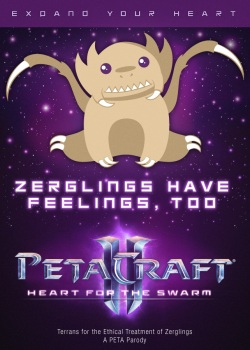 With StarCraft II: Heart of the Swarm about to launch, People for the Ethical Treatment of Animals would like to remind everyone that Zerglings have feelings, too.

PETA will be attending tonight's launch event for StarCraft II: Heart of the Swarm in Irvine, California, but in a slightly different guise than we've come to know it. In honor of the long-awaited StarCraft release, the group is renaming itself "Terrans for the Ethical Treatment of Zerglings" for the night and will hand out pamphlets entitled Zerglings Have Feelings, Too.

"When playing StarCraft, I had noticed how the Zerg were treated more like animals than like other people. I couldn't help but wonder if there would be an analog to PETA in the world of StarCraft," PETA online marketing strategist Joel Bartlett wrote. Thus was born the idea for TETZ, and tonight's appearance at the StarCraft launch.

"Remember, while Zerglings are not real, there are many equally 'strange' and exotic animals we share this planet with who deserve our empathy. Just because crocodiles and snakes look alien to us, that doesn't make it OK to skin them alive for a handbag, shoes, or a belt," Bartlett wrote. "And if we had to share our world with the Zerg in reality, I'd like to think that we'd make an effort to understand and respect them rather than sending out the battlecruisers - because the alternative to having empathy for other beings is about as grim as it gets."

Setting aside the hard-to-avoid dislike for PETA's more extreme behavior, you have to admit this is a pretty clever campaign. It raises awareness without casting judgment and ties in smartly with what is bound to be one of the year's biggest game releases. Yes, PETA does some objectionable (and outright indefensible) things, but this is a smart and funny way of getting its message out - even if the idea of making nice with the Zerg makes about as much sense as sitting down for tea with a rabid grizzly bear.