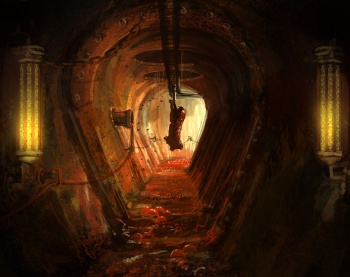 The Amnesia sequel is a real change of pace for thechineseroom's Dan Pinchbeck.

"I think we started working on it sometime around November [2011]," says thechineseroom's creative director, Dan Pinchbeck, "and we thought it was going to be a couple hours long." That first impression didn't last, and Pinchbeck - the man behind Dear Esther - realized there was a lot of potential in an expanded story for its Amnesia follow-up, A Machine For Pigs.

"In Esther, the story doesn't really actually exist," says Pinchbeck, adding that "It's just a whole bunch of ideas about a story that the player then uses to create the story themselves." Amnesia: A Machine For Pigs is a much more traditional story format than Pinchbeck's Dear Esther, but that's a welcome relief, in some ways, as it allows Pinchbeck to play around with some different concepts. There isn't as much pressure to be experimental with A Machine For Pigs, and that means Pinchbeck can concentrate on story elements, and an expanded plot, which in turn means increased production values.

Amnesia: A Machine For Pigs hasn't got a confirmed release date yet, but that should change very soon; at the moment, Q2 2013 is as far as thechineseroom's prepared to go.