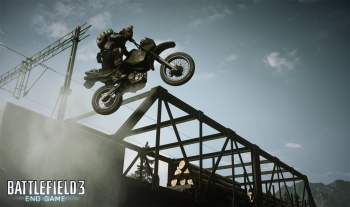 We hope you've got a ton of extra hard drive space on your Xbox 360, because the new End Game DLC for Battlefield 3 will require an additional 1.92GB patch right out of the box.

Here's the situation: You're a huge fan of EA's Battlefield series. You've been playing the franchise's games since Battlefield 1942, and you couldn't wait for today to roll around because it marks the debut of what is supposedly the final DLC pack for Battlefield 3. So, you fire up your Xbox 360, download the aptly-named End Game DLC and settle in to enjoy the muted horrors of virtual war. But wait! There's a problem! Your console is telling you that you don't have all the required files! Yes, you did download the entirety of the End Game DLC, but before you can enjoy your new content you also must pull down a 1.92GB patch for the game.

Dubbed "Multiplayer Update 6," the patch purportedly serves to streamline game functionality, excise files that Battlefield 3 no longer needs and improve overall performance. At least, that's what little we've been able to glean from official documentation. That nearly 2GB patch size implies that there are lots of things going on within the update, but when we attempted to contact EA to ask exactly what the patch does that the End Game DLC itself doesn't, we were met with a surprising "no comment."

Not that we expect a conspiracy here or anything. The purpose of this story is merely to let you all know ahead of time that when you next attempt to play Battlefield 3 you may need to download Multiplayer Update 6. The good news here is that if you're sitting at work, contemplating all of this, you can queue up the patch download by visit Xbox.com.

On the other hand, if you're only interested in playing the Battlefield 3 singleplayer campaign, you can ignore everything I've written above. Then again, if you're still only playing Battlefield 3 as a solo experience you may want to rethink your choice of games.

Gallery of the Day: 8 Battlefields To Get You Ready For Battlefield 4 DrStrangelove 2 Comments