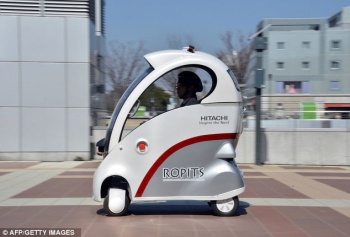 Hitachi's Robot for Personal Intelligent Transport System (Ropits) will be able to be called from several computer networked "stops" around Tsukuba city.

The "designated driver" may become a thing of the past with Hitachi's new robot car that uses GPS and laser sensors to drive itself. The Robot for Personal Intelligent Transport System (or Roptis for short) will make its debut as a new form of public transport for the city of Tsukuba, Ibarakai Prefecture in Japan. The single occupancy robot can pick up and drop off passengers autonomously, and comes with a joystick to let riders take control in an emergency.

The Roptis was originally designed to help those who have difficulty walking, specifically the elderly, who are becoming more and more abundant in Japan due to its rapidly aging population. As such, it is small enough to maneuver through pedestrian spaces such as sidewalks and parks.

Several computer networked "stops" will be placed around Tsukuba city, where passengers can call for a Roptis to come and pick them up. Passengers need only enter their desired address into the car's touch screen GPS, and it will automatically drive them there. The Roptis comes equipped with 'active suspension' which controls each wheel individually to enable it to drive over curbs and uneven ground while keeping passengers comfortably upright. Laser distance sensors help keep it from crashing into obstacles.

The vehicle could become the late-night transport option for Japan's "salarymen," - businessmen who are often pressured into working very late nights and attending "not technically compulsory but everyone will look down on you if you don't go" after-work drinking parties.