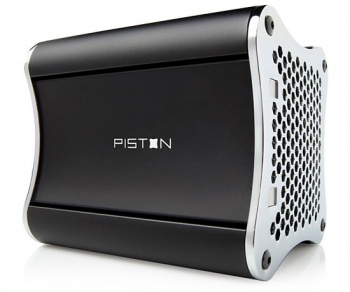 The $1,000 minimum Piston could be seen as more than a Steam box, Xi3 CEO Jason A. Sullivan claims.

Xi3's Piston - the box that will cost you $1,000 minimum to acquire - is not a Steam box, and Valve's Doug Lombardi has said as much, and more. Lombardi said, after the Xi3 preorder announcement, that Valve had worked with Piston's maker, but it wasn't working with them now, and had no official ties to the Piston. Quite right, Xi3 CEO Jason A. Sullivan responds; in fact, his Piston could be perceived as "something more than just a Steam Box."

After all, Sullivan points out, his Piston will still be able to access Steam - Linux edition or Microsoft - and other internet-based gaming platforms. "Which is more than what Valve apparently has planned for its official Steam Box," says Sullivan, going on to add that, "contrary to Gabe's vision," Linux definitely is not the OS Sullivan will be using in his Piston. The Microsoft OS is the way to go; that's what Sullivan says will give the Piston access to "all game stores/platforms." This would be the same Microsoft OS that Newell would prefer to see burnt at the stake, so there may be some philosophical differences between Newell and Sullivan.

Sullivan rounded off his statement with a slightly hopeful remark, that just because he wasn't working with Valve right now didn't mean he would never work with Valve in the future. He then capped it with "what Valve does or doesn't do with its Steam Box will be up to them. So Gabe, it's up to you. The ball is in your court."