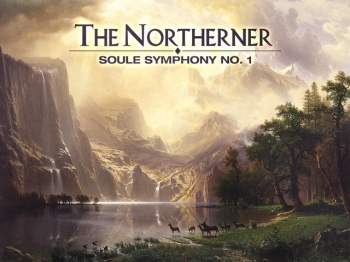 Jeremy Soule, the composer behind the epic Skyrim score, has turned to Kickstarter to fund his next album with unexpected success.

When you recall the musical accompaniment found in The Elder Scrolls V: Skyrim, what descriptors come to mind? Epic? Sweeping? Grandiose? All of those are perfectly apt, and that's exactly why composer Jeremy Soule is such an important name in the field of videogame music. His work on Skyrim was arguably the best videogame score to emerge in years, and it easily rivals even the top names in Hollywood. Unless you inexplicably disagree with everything I've just typed, there's good reason to hope that Soule will continue his efforts.

Unfortunately, all creative enterprises require cash to get things off the ground. Recording a new album is no exception. Thus, Soule turned to Kickstarter, hoping to trade on the popularity of his Skyrim work to pull in the money necessary to fund his next album.

Appropriately dubbed, Soule Symphony No. 1, The Northerner, Soule's latest work appears to continue his affection for high fantasy and the epic music that best accompanies it, while also employing tropes normally reserved for classical music. "This symphonic work is planned to feature live players and singers in addition to the innovative technologies for which Jeremy has become known," the Kickstarter description claims.

In terms of Kickstarter projects, Soule wasn't seeking much money. His goal was a mere $10,000, which has already been surpassed in the scant few hours the Kickstarter drive has been active. As of this moment his total stands at $12,555. Great news, right? Congratulations to Mr. Soule for reaching his monetary goal so quickly. That said, there are still 30 days left on the clock, and the Kickstarter page offers no information on what Soule might do with the excess money. Perhaps he'll fund a second album, or maybe he'll hire an artist to create a wicked sweet lenticular cover for Soule Symphony No. 1. We've reached out to the artist to ask about his plans for the funds, but have yet to hear back. We'd assume he's currently, understandably overwhelmed by the outpouring of support.

Until Soule offers official commentary on what he plans to do with the extra cash, we'd suggest holding off on donating to the Kickstarter drive. There's not much point in handing over your money if it's just going to be refunded to you by a gracious musician, is there? Besides, you look a little thin. You should eat more. Go buy a hamburger.