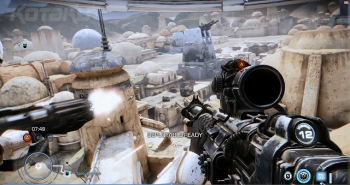 Star Wars Battlefront III could be closer than you think, as long as Disney gives it the green light.

Star Wars First Assault is a very poorly kept secret. While the game hasn't been officially announced yet, we've known about it for a while now from trademarks and a slip-up on XBLA. With LucasArts currently being acquired by Disney, First Assault (along with Star Wars 1313) is frozen in carbonite until Disney figures out a plan for the Star Wars property. Unable to make any official announcements, the team at LucasArts has been working on the game in silence for months. First Assault was intended for a September beta followed by a spring release, acting as a predecessor for re-opening development on Star Wars Battlefront III. Now it's nearly finished, but its fate (and by extension, the fate of Battlefront III) is in the hands of Disney.

Kotaku has been releasing a steady stream if insider information from the First Assault team. The game was to be LucasArt's answer to the success of Call of Duty and Battlefield, featuring 16-player matches with tactical combat and an XP progression system of unlocks. Some features would be notably absent - including vehicles and Jedi - but this was deliberate. According to an inside source, the plan was to use First Assault's engine to lay the groundwork for Battlefront III, which would be built from the ground up by the same team (rather than using Free Radical's incomplete engine).

It's hard to guess where First Assault is right now, since the team's hands are tied from making any official announcements. Leaked screenshots and videos show footage from an early build of the game, demonstrating a number of weapons and special abilities on recognizable maps like Bespin and Tatooine. There are enough twists to set the game apart from traditional war games, including a holographic decoy and a repulsor that seems to throw nearby players away from the user. There's also a first-person clip of an Imperial Stormtrooper donning his helmet, which would have been part of a trailer if LucasArts had permission to release one.

Disney hasn't announced anything about their intentions for LucasArts' game projects. If First Assault is given the go-ahead, expect to see it as a downloadable title on XBLA. Until then, our Bothan spies will keep their eyes open for more information.