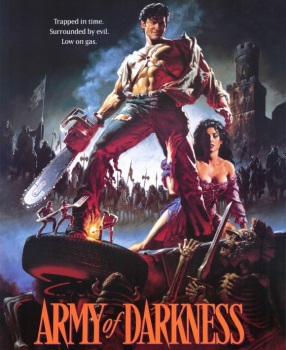 Sam Raimi's longtime producer says a new Army of Darkness flick is in the works and that Bruce Campbell is set to return as Ash.

The Evil Dead scene is a confused one these days. An Evil Dead remake is on the way, and earlier this month Raimi revealed that he's planning to work on a script for Evil Dead 4 this summer. But at the SXSW Film Festival last week, Rob Tapert, who has partnered with Raimi on numerous projects going all the way back to the original Within the Woods, said the new film isn't actually Evil Dead 4, it's Army of Darkness 2.

"Everybody calls it Evil Dead 4 but Army of Darkness wasn't called Evil Dead anywhere except by the fans," he told Comingsoon.net.

It's a fine distinction, but an important one. A Google translated Peliblog report says Raimi, who's also producing the Evil Dead reboot, insisted that it not interfere with his ability to make another Army of Darkness sequel starring Ash, which is why Campbell's character doesn't appear in it. Because of that, the two films "co-exist beautifully," Campbell said.

But Campbell also suggested that this is a recurring theme for Raimi and that it may just be pillow talk. "Sam threatens this every six months," he said in the Comingsoon interview. "I've heard this a thousand times, because in the back of his mind, he never wants to let go, because he loved making these movies. We all loved making them together. They were a nightmare to make, very difficult, but they lasted the test of time, so he's not going to let that go, and I'm never going to say 'no.' It'll be me and a walker fighting some other old guy. But that's what he does and who knows? It may happen."

"It may happen" is a far cry from "it will happen" but it's a lot better than "it won't happen." Speaking strictly for myself, I have zero interest in an Evil Dead reboot, but a new Army of Darkness film starring Bruce Campbell? Gimme some sugar, baby!