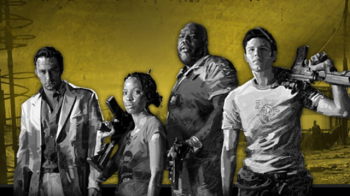 Don't get too excited; this "crossover" isn't nearly as impressive as you'd hope.

A few minutes ago an email appeared in my inbox. It's subject line read, "Capcom and Valve Announce Resident Evil 6 X Left 4 Dead 2 Crossover Project." My eyes grew wide at those words, and I frantically clicked through to read the text. 30 seconds later I was a whole lot less excited.

Though not as awesome as it initially seems, those of you with particular affection for these two titles will be happy to hear that these additions are completely gratis. If you own Left 4 Dead 2 or purchase the PC iteration of Resident Evil 6, you won't need spend any extra cash to see these bonus characters in action.

As far as which characters will be making the jump to a different gaming universe, the roster is actually quite fleshed out. According to Capcom, Left 4 Dead 2's quartet of heroes (Coach, Nick, Ellis and Rochelle) will make playable cameos in Resident Evil 6's PC-exclusive "The Mercenaries No Mercy" gameplay mode. Each "will have a special customized weapon load-out created just for use in Resident Evil 6." Further, two of Left 4 Dead 2's special infected will make appearances as enemies in this mode: The Witch and the Mini Tank.

On the Valve side, Left 4 Dead 2 will see three enemies -- the Lepotitsa, Napad and Ogroman -- from Resident Evil 6 join the legions of shambling horrors attempting to kill players.

There's currently no official release date for these content additions, but we expect them soon. Most likely they'll appear alongside the retail debut of Resident Evil 6's PC port, which hits shelves on March 22.