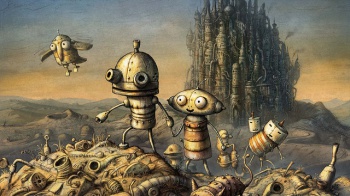 Another handheld version of Machinarium is almost here, and it's bringing all PS3 features along with it.

If you're anything like me, you've probably got multiple versions of Machinarium kicking around for various platforms. After its initial PC release, the game received a collector's edition, featured in some indie bundles, and was ported to Android, iPad, and even Blackberry devices. More recently, the popular adventure game got its first home console release through the PlayStation Network, along with the promise that a Vita version was forthcoming. Now Amanita Design has revealed that Machinarium for Vita will finally be available starting March 26, and includes all features from the PS3 version and some Vita-specific extras.

Machinarium for Vita will port all visual enhancements from the PS3 version, including its zooming ability and full-quality graphics. As a PSN game, Machinarium will have full Trophy and Leaderboard support, letting players compare their progress and mini-game scores with others. For the point-and-click enthusiast, Vita players can also switch between touchscreen and analog-stick controls at will, using whichever style suits their liking.

One would assume that every gamer and their immediate family had played Machinarium by now, but the game's appeal seems to keep growing with each iteration Amanita releases. Regardless, being able to combine a handheld experience with full PSN support is a nice touch that new and old players should appreciate. And if you have multiple Machinarium copies already, at the very least one more wouldn't break your bank. The game launches on the PlayStation Store March 26 for $6.99.