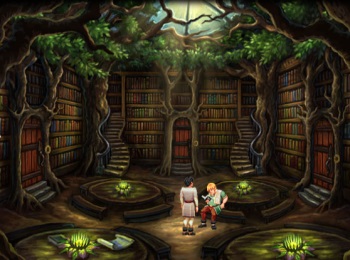 A demo for the Sierra-inspired adventure Mage's Initiation offers a short-but-sweet look at where your Kickstarter money is going.

The Mage's Initiation Kickstarter is drawing to a close and the good news for those who enjoy this sort of thing is that its goal of $65,000 has been handily surpassed, standing at just over $97,000 at last check. The better news is that the developers have released a demo in hopes of attracting a last-minute surge of support as it reaches for stretch goals, and it's actually pretty good.

The demo has been kicking around for a couple of days now and the team is making a few adjustment based on the feedback it has received. Topping that list is the addition of a combat difficulty slider, which had been left out in the original design because most combat is optional. 16:9 resolution will also be implemented if the $120,000 stretch goal is hit.

It's a very short demo, probably won't eat up more than 20 minutes of your life, and while it's a little rough around the edges, it does a nice job of showing off the game's interface, art style, music and overall flavor. And it is very Sierra, with low-res but lovely visuals and needlessly obtuse solutions to simple, every-day problems. If that's your bag, I suspect you'll enjoy it very much.

The Mage's Initiation Kickstarter finishes up at 12:01 am on March 23. You can snag the demo right here.