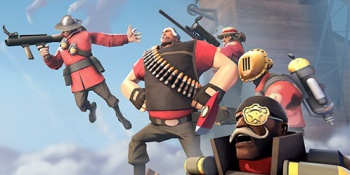 Pre-ordering BioShock Infinite on Steam will also grant you the Industrial Revolution pack, a copy of the original BioShock and seven exclusive TF2 items.

A special promotion for BioShock Infinte on Steam unlocked extra pre-order bonuses depending on how many people pre-ordered the game. As well as including the Industrial Revolution pack that all pre-orders of BioShock Infinite come with, the Steam promotion featured 3 additional "reward tiers" that would grant customers extra goodies. The third tier of rewards has now been unlocked, and includes a free copy of XCOM: Enemy Unknown.

The first tier included a copy of the original BioShock, and the second tier included seven items for use in Team Fortress 2. The items are as follows:

With this Vox Populi anarchist mask, you can terrify your enemies into thinking you're the Devil Himself, or worse, a protestor. Either way, they're probably going to avoid you at the entrance to the supermarket when you try to get them to sign something.

Want to command respect from people standing at an indeterminate distance from your immediate right? Bolt on a platinum Pinkerton badge and experience the thrill for yourself!

Turkey? Chicken? Game hens? Your head? This cast iron poultry furnace will smoke anything placed inside it.

Protect the important thoughts in your head -- ones like "liberty" and "freedom" and "democracy" -- with good, honest, hat-shaped American steel. This helmet won't run (until heated to 2500°F)!

Throw this hat on the ground to express rage, or in the air to express joy! Take a hat-based trip through time to learn how your great grandparents displayed emotions in the days before emoticons!

It gets pretty quiet in that sniper's nest. Why not treat yourself to the haunting rhythmic symphony of bolts being constantly pooped by this mute, easily terrified incontinent bird?

Those who have already pre-ordered the game will still be granted all the extra reward tier items. If you already own BioShock or XCOM: Enemy Unknown on Steam, you can gift them to a friend.