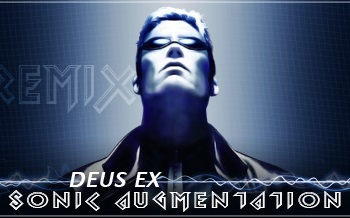 Original Deus Ex composer Alexander Brandon has teamed up with OC Remix to bring the soundtrack back to life with Deus Ex: Sonic Augmentation.

The original Deus Ex was a brilliant game with an absolutely fantastic soundtrack composed by Alexander Brandon, Daniel Gardopée and Michiel van den Bos. And while it's held up very well over the years, now (well, soon) you can listen to a different take on it thanks to Deus Ex: Sonic Augmentation, a collaboration between Brandon and OC Remix that Eidos is very slowly giving away.

The album features "cybernetically-enhanced arrangements" of eight tracks from the original Deus Ex soundtrack, beginning with "The Search For Ambrosia" by Zircon and Jillian Aversa, a remix of the game's "NYC Streets" track. It's good stuff, unique and "new," yet distinctly Deus Ex and with some very recognizable hooks from the original.

Unfortunately, that's all you get for now. All the tracks on Deus Ex: Sonic Augmentation will be available at no charge, but Eidos is releasing just two tracks per week on its Facebook page, meaning that it won't be in the wild in its entirety for another month. You can stream it or download it, and those of you who aren't down with the whole Facebook thing won't have to "like" it first, but you will have to wait for it.

Eidos didn't say when the next track will be available, but I'd guess that Thursday is a likely candidate. In the meantime, you can get started with "The Search For Ambrosia" at the Deus Ex Facebook page.

The Escapist Presents: The New 12 Days of Christmas The Escapist Staff 18 Comments
Comments on