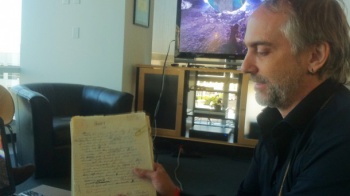 Garriott thinks the system is failing game designers, by funneling everyone who isn't clearly talented at either programming or art into design instead, leading to "lazy" designers.

"Other than a few exceptions, like Chris Roberts, I've met virtually no one in our industry who I think is close to as good a game designer as I am," Richard "Lord British" Garriott, creator of the Ultima series tells PC Gamer. "What I'm saying is, I think most game designers really just suck, and I think there's a reason why," Garriott says, going on to explain that he thinks the system is failing would-be game designers.

"It's really hard to go to school to be a good designer," explained Garriott. He thinks that the majority of game designers only fall into the job because they are passionate enough about video games to want to develop them, but don't have any real skills as an artist or programmer. "We're leaning on a lot of designers who get that job because they're not qualified for the other jobs, rather than that they are really strongly qualified as a designer." He thinks that training options for would-be game designers are much rarer than those options available for artists and programmers.

"And every designer that I work with...I think, frankly, is lazy." Garriott says that for someone to be a "good" game designer, they have to really put in the hard yards like he did when he first started out, something that a lot of modern game designers just aren't willing to do. "They generally say, 'You know, I really like Medal of Honor, but I would have bigger weapons, or I would have more healing packs, or,' you know. They go to make one or two changes to a game they otherwise love versus really sit down and rethink, 'How can I really move the needle here?'"

"I think there's really very few great game designers," he continued, adding Peter Molyneux and Will Wright to his list of good designers. "They clearly exist, but on the whole, I think that the design talent in our industry is dramatically lower than we need, as an industry. It's a very hard skill to learn."

Very provocative words from Lord British, but if anyone is entitled to them, the man who practically invented the computer RPG is. Garriott's latest project, Shroud of the Avatar is currently in the early development stage, after recently reaching its Kickstarter goal.

Update: A poster identifying himself as Garriott has clarified his comments, claiming that articles posted about them were written with a "sensationalist slant" and that his main point was that game design the hardest, yet most valuable skill in the industry.

"Thanks (NOT!) for the sensational headline! While I appreciate those of you who read the whole thing, to see better the whole context, even still, this article is skewed to make a sensationalist slant. My point was, that game design is the hardest, but also the most valuable skill to build in the industry. That every company lives and dies based on the talent of its game design team, and that as an industry we are not doing so well creating the talent we need in this industry, because educational systems have not caught up in this area as well as programming and art. I was not trying to toot my own horn, rather state that game design is hard. Ah well. :)"