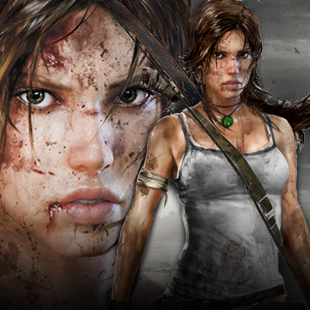 "It's very difficult to keep that good affable character when they're having to slaughter loads of people," says Rhianna Pratchett, writer of Tomb Raider and crafter of the current Lara Croft, one of gaming's more bloodthirsty protagonists. "But what we tried to do with Lara," Pratchett goes on to say, "was at least halve the first death count," in an attempt to balance narrative needs against the action-oriented demands of gameplay.

There's only so far a writer can go down that road, particularly in a game like Tomb Raider, where the combat is one of the main draws. "I'd say from a narrative perspective, we would have liked the ramp-up to be a bit slower," Pratchett says "[But] when players get a gun, they generally want to use the gun." That was why Lara spent so much time, in-game, unarmed, and why, after that, Lara still had to make do with the bow for a while before getting her hands on a firearm. Narrative demanded that restraint; but gameplay demands action, and that means a rapid increase in the body count as soon as Lara gets her hands on a firearm.

"Narrative can't always win," Pratchett admits. "[S]ometimes combat, or gameplay or whatever, has to win out." Pratchett hopes that games will start to focus more on character and characterization in the years to come, describing it as an "undercooked" area of game development. She knows there's no magic bullet but hopes that, with time and perhaps also with shifting perceptions of what a character can or ought to be, character - and with it, narrative - will become more of a focus in gaming.