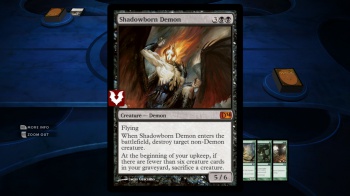 Another year, another videogame iteration of the world's most popular fantasy card game - only this time Duels of the Planeswalkers will also appear on the Android operating system.

Since 2009, Wizards of the Coast has been releasing annual updates to the videogame incarnation of its wildly popular Magic: The Gathering collectible card game. Though the series has long been attached to the unwieldy subtitle "Duels of the Planeswalkers," the most important part of each release's title is the number indicating which year it ostensibly represents. Similar to EA's beloved/loathed Madden NFL franchise, the latest version of the Magic games is officially titled Magic 2014 - Duels of the Planeswalkers, despite the game featuring a release date that will almost certainly fall within the 2013 calendar year.

Baffling naming schemes aside, the latest addition to the Magic: The Gathering line features the standard, incremental updates fans have come to expect from the series: Slightly improved graphics (though, to be fair, there's only so much a developer can do to make a card game appear aesthetically interesting), new cards and decks, and what Wizards of the Coast describes as "a more focused integration between online and offline play." Have a look at the game's official description:

Magic 2014 - Duels of the Planeswalkers builds on the success of previous games in the franchise and adds all new features including an immersive storyline, 10 brand new decks, 15 new encounters, 10 new puzzle challenges, and an all-new play mode in addition to other exciting features. Magic 2014 players will get the first look at cards from the Magic 2014 Core Set in Duels of the Planeswalkers, creating even more seamless integration between the online and offline games.

The most interesting new feature introduced to the franchise with its "2014" iteration is that finally the title will be available to those of you using gadgets powered by the Android operating system. The game will also be found on the Xbox Live Arcade, PlayStation Network, iPad and Steam platforms, but that's to be expected. The franchise's Android debut, by contrast, is totally novel.

Notably absent from this morning's announcement is word on when this game might debut and what price point it might feature. There's not even a vague release window available. That said, Magic 2014 will have a sizable presence at this weekend's PAX East conference, so expect more information to emerge from that event, alongside a deluge of opinions on the newest cards and gameplay mechanics from hardcore Magic: The Gathering players.