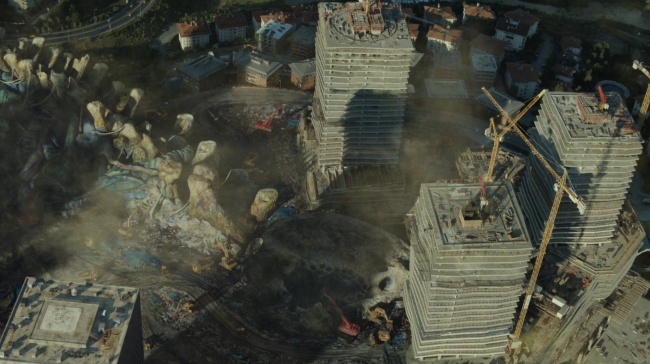 Guillermo del Toro's upcoming "giant monsters battle giant robots" flick Pacific Rim is going to be epic, and we've got a picture of the oversized corpse to prove it.

This morning an image from Pacific Rim, an upcoming film directed by Guillermo del Toro and starring Charlie Day, Idris Elba and Ron Perlman (among others), appeared on the movie's official Facebook page. That would the picture you see embedded above, though we urge you to visit its original location as the picture loses a lot of important detail when reduced from its original size.

As you may know, Pacific Rim centers on a global monster attack and humanity's efforts to stave off this threat in the raddest possible fashion: By bolting young, attractive pilots into the cockpits of gigantic robots. If this sounds like the plot of any number of anime movies you've seen over the years, that's because del Toro has specifically designed this movie as a big-budget homage to the kaiju genre. For those of you unfamiliar, "kaiju" is a Japanese term that colloquially refers to films featuring giant monsters, and as you can see from the abominable corpse lying amidst the rubble of that ruined city, Pacific Rim certainly has some huge, otherworldly creatures.

"But you also promised us robots! Where are the robots?" I hear you shouting at your monitor in frustration. While del Toro's production team failed to complement this picture with another centered on one of the film's mechanized protagonists, the last Pacific Rim trailer did a pretty solid job of depicting the metal behemoths. As it's a Hollywood trailer, it doesn't really show things off in full, but it does at least give you a nice feel for what you'll see when the movie hits theaters on July 12, 2013.

Since most of you are videogame fans, you'll also likely recognize a certain monotone voiceover found in that vignette. Yes, it's supposed to sound like that, and Valve is aware of this. Del Toro included that voice specifically as an homage to Portal and Gabe Newell's firm is reportedly flattered by the inclusion.