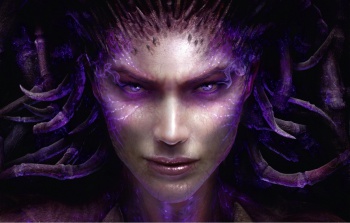 Blizzard also boasts that 1.1 million viewers tuned in to see the Heart of the Swarm tournament at the MLG Winter Championship in Dallas.

Heart of the Swarm is the first expansion pack to Blizzard's sci-fi RTS StarCraft II. It was released the other week and sold a lot of copies. Blizzard boasts "around 1.1 million" copies of both digital and retail versions of the game were sold within the first two days. As well as this, they claim that 1.1 million viewers tuned in to the Heart of the Swarm tournament at Major League Gaming's most recent event.

While the sales figures include both physical retail copies and digital downloads, Blizzard did not provide a breakdown of the percentage each made up. In August 2010, Blizzard announced that the original StarCraft II game had sold more than 1 million copies in its first day on sale, and went on to sell around 1.5 million copies in its first two days.

"We want to thank the global StarCraft community for the incredible passion and support they've shown for Heart of the Swarm," said Mike Morhaime, CEO and co-founder of Blizzard Entertainment. "In addition to a brand-new single-player campaign, we added a ton of enhancements with this expansion to make StarCraft II even more fun to play, and more exciting to watch. We're pleased to see gamers and eSports fans around the world enjoying Heart of the Swarm."

"StarCraft II has been a premier game at Major League Gaming events since Wings of Liberty was released," said Sundance DiGiovanni, CEO of Major League Gaming. "Heart of the Swarm has generated even more excitement, and we're all looking forward to what the future brings for StarCraft II eSports." Heart of the Swarm reached a peak concurrent viewership of more than 157,000 viewers during the event.

Little is known of Legacy of the Void, the upcoming expansion and finale in the StarCraft II trilogy, except that it will feature the Protoss.