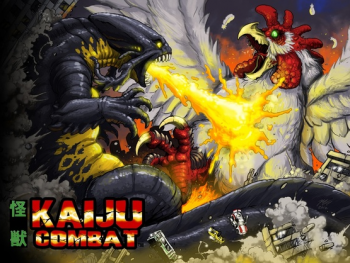 Wizards of the Coast wants to keep its Kaijudo trademark clear of all impediment.

If you're fond of giant monsters rampaging through cities - and really, who isn't - you may have picked up on Kaiju Combat, a cheerful Tokyo stomp of a game that has you send forth your monster to battle. It was enjoying a respectable Kickstarter until recently, when Wizards of the Coast stepped in to crush it under the weight of an intellectual property dispute. Lawyers acting on behalf of Wizards claimed that Kaiju Combat was a little too close to its Kaijudo, a CCG that Wizards may, some day, turn into a video game.

Wizards first approached Simon Strange, owner of Sunstone Games and the originator of Kaiju Combat, back in 2012. At the time, Strange took the view that Kaiju was an ordinary word, used in context, and Kaijudo couldn't be extended to the word Kaiju. He said as much, and Wizards didn't respond. Strange went about his business, only to have his Kickstarter derailed at the eleventh hour by this dispute.

"I initially interpreted the [first] message as a lawyer being thorough and covering their client's trademark," Strange told Games Politics. "Obnoxious, but not something I needed to get upset about or talk about in public." Then things got messy, and Strange was forced to make the issue public. He still doesn't think that Wizards actually cares very much about Kaiju Combat, and sees this more as legal hairsplitting cooked up by lawyers, who feel they need to rattle sabres or lose any chance of defending Wizards' trademark in the future.

Strange knows he can't justify spending development money on fighting a trademark claim. "But at the same time it would really make me sad if we're forced to change our name just because we can't afford to defend ourselves," he says. "I'm still hopeful that it won't come to that."