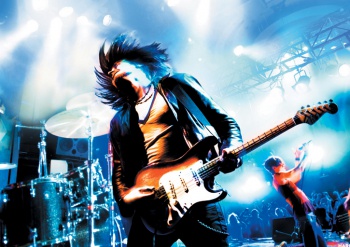 With the upcoming release of Don McLean's seminal hit American Pie, Rock Band players will find themselves with no additional DLC appearing for the smash-hit rhythm title.

Since Rock Band first debuted in November of 2007, the series has been accompanied by a steady stream of downloadable content additions. More specifically, this means that each week players were greeted with a minor handful of new songs designed by developer Harmonix for use in its rhythm game titles. Most impressively, all of these DLC tunes were cross-compatible with any entry in the series, meaning that all the songs you downloaded years ago for the first Rock Band will still function with 2010's Rock Band 3. This wasn't just a massive show of generosity on the part of Harmonix and Rock Band publisher EA; Both companies benefitted massively from this scheme as these years of bonus songs provided a steady revenue stream long after each individual Rock Band game had become old news in the eyes of gamers.

Sadly, all good things come to an end, and now, almost six years after the first DLC music was issued for Rock Band, Harmonix has announced that we're at the end of the company's support for the series. On April 2, Don McLean's American Pie will hit the Xbox Live Marketplace and PlayStation Network and signal the final entry in the franchise's long, long history of post-release additions.

While this is undeniably sad news for Rock Band fans, we all knew that Harmonix couldn't support the franchise indefinitely and its efforts to date are far more impressive than any other company's efforts to prop up a game after it hits shelves. Though this announcement forces us to face the reality of diminishing returns, it comes after the total Rock Band music catalogue has swelled well beyond 4,000 tracks.

If there's one silver lining to this sad news, it's that those of you who own an Xbox 360 will no longer have to scroll through dozens of new Rock Band tracks every time you attempt to scan the latest releases on the Xbox Live Marketplace. Whether you blame Harmonix or Microsoft, the online service has long been clogged with Rock Band tunes that, while attractive for Rock Band players, mostly just annoy everyone else with their unending ubiquity. I'm a huge fan of the franchise (and have the dozens of faux intstruments to prove it), but I'll be glad to see a more organized, clean Xbox Live Marketplace the next time I'm wondering about the latest Xbox Live Arcade titles.