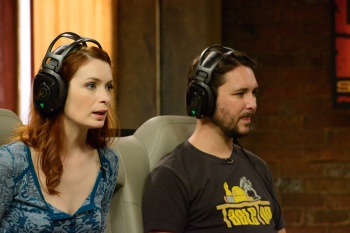 It's a comment I hear often. Game developers are getting so good at making supplementary videos for their work that they should start making it full time. It couldn't be any worse than the drivel we see on real TV stations. Mark Kern is the CEO and Creative Director of Red 5 Studios, currently making the Firefall MMOFPS. He announced the existence of Stage 5 today, a internet "channel" of video programming about and for gaming and gamer culture. Of course, there will be shows about Firefall, but Stage 5's mandate is to spread the love of all games with high-quality shows.

"Red 5 isn't just about making games that take risks," Mark Kern said. "We're about celebrating the risks and creativity of the indie developer. Like us, they're trying to change the industry and create fun. When we were starting out, we had a problem in that we were an unknown studio and no one had heard of Firefall, no one believed in a free to play back then. It was a little hard to get exposure. That's because most of the exposure you found on network gaming TV was devoted to massive titles, big publishers and consoles. So we said, 'Why don't we change something else about our industry? Why don't we create network quality game programming that really celebrates equally all the efforts in the industry.'"

Mark Kern said Stage5.tv would be community driven. For now, the shows announced include Gamechangers, a "Mythbusters" meets gaming in which a trio of hosts test out gaming concepts like jetpacks and zombie decapitations to see if such physics would happen in real life. Next up is Rise of the Indies, which will go to small studios and create short documentaries on their process. Firefall Live will be a weekly show talking about the recent changes in the ongoing beta, as well as highlighting the community, and bringing web celebrities like Wil Wheaton and Felicia Day on to play.

For now, you can watch Stage 5 on YouTube, but Kern promised an iPad app which will let you watch the videos directly, packaged together with a comic book reader pre-loaded with the Firefall manga written by Orson Scott Card. An app will also be available on the Ouya, when it comes out.