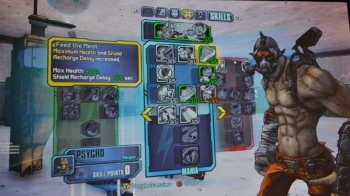 There's a new vault hunter in town, and he doesn't look friendly.

The Vault Hunters of the Borderlands series have never exactly been mentally stable - fans of the series can attest that the playable characters find just a little too much glee in gunning down everything with a pulse and shamelessly taking their stuff. The newly announced sixth character class for Borderlands 2, however, makes the rest of the gang look downright noble by comparison. Krieg the Psycho, an escaped experiment with multiple personalities and an axe to grind, will bring a new melee-focused flavor of violence to the shoot-and-loot FPS in the upcoming Psycho Pack.

Equipped with a nasty-looking Buzz Axe, Krieg will spend most of his time getting up close and personal with his enemies. Players can dive into his Bloodlust skill tree to stack combat bonuses (similar to Borderlands 2's previous DLC class, the Mechromancer), "live on the edge of sanity" with the Mania tree, or master fire elemental attacks in the Hellborn tree. Krieg will get a few ranged abilities, but expect to find him in the middle of the fray whenever possible.

Even if you don't feel like starting over with a new character, the developers at Gearbox have a few more updates in store. The Ultimate Vault Hunter Upgrade Pack (which will be free to those with the Borderlands 2 Season Pass) will bump the level cap from 50 to 61 - despite the previously discussed concerns that increasing the maximum level might destroy the game's balance. The upgrade will also unlock the Ultimate Vault Hunter mode for players on their third replay of the game.

Gearbox also has one final DLC campaign in the works, though not much has been revealed about its contents as of yet. The Ultimate Vault Hunter Upgrade Pack will arrive on April 2 for the price of $4.99 (or free as part of the Season Pass), and the Psycho Pack will unleash Krieg the Psycho sometime in May for $9.99. The final story DLC (also included with the Season Pass) is scheduled to release in June, and will likely follow the trend of previous DLC campaigns at the $9.99 price point.