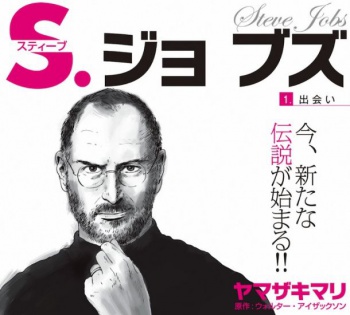 The life story of Apple's founder and tech guru is being adapted for a Japanese comic anthology.

Whether you love or hate Apple products, it's hard not to admire Steve Jobs for making it all possible. As the co-founder and chairman of Apple, Jobs played a major role in the development of personal computers, not to mention mobile devices like the iPhone and iPad. That kind of impact has naturally inspired several attempts to memorialize Jobs following his death in 2011. His official biography by Walter Isaacson became an instant best-seller, while two versions of his life story should be coming to theaters this year. Perhaps the most unique retelling of Jobs' early years is a biographical manga within the monthly Kiss anthology, the first part of which was published this week.

The manga biography, created by Mari Yamazaki, directly adapts Isaacson's book through the genre's recognizable art style. Those of you who clicked the link to see if Manga Jobs trades ki blasts with Bill Gates will be sorely disappointed; readers instead learn about Jobs' relationship with his adopted parents, rebellious school years, and budding interest in engineering. The first chapter ends with the real-life meeting between Jobs and Steve Wozniak at their high school, an encounter that would lead to the Apple computer and all that followed.

Anyone who wants to read the manga themselves can track down this month's copy of Kiss, or order an electronic version from Yahoo Japan's digital bookstore. The story only appears to be available in its native Japanese, but its initial pages manage to present Jobs as the iconic figure in the later years of his life that many will recognize. If the story is popular, and what about Steve Jobs isn't at this point, we could very well see an English collection appear in Western bookstores in the near future.