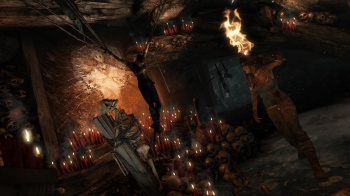 Yoichi Wada, former President and Representative Director, will be replaced by Yosuke Matsuda.

Square Enix, maker of Tomb Raider and Deus Ex among many other titles, has announced that it expects to make a significant loss for the fiscal year ending March 31, 2013. Its Digital Entertainment Segment is to blame; slow sales of major console titles in North America and Europe are the main reason why the loss - more than ¥10 billion ($106 million) in ordinary income before expenses and deductions - is expected to occur. Moreover there is an extraordinary loss on top of the projected profit bombshell: what Square describes as a "loss on disposal of content" and "loss on evaluation of content" will account for a further ¥10 million loss. The extraordinary loss is part of a general restructuring at Square, which it describes as "major reforms" needed to revamp its business, in light of the rapidly changing games market.

Back in 2011, Wada claimed that "our game development has become weaker than expected," and predicted that revamping it would take one or two years. Poor internal communication and inefficient work practices were said, at the time, to be the root causes of Square's problems.

In 2012, Square posted a ¥6 billion ($63.6 million) profit, thanks in no small part to Deus Ex. While Tomb Raider sales have been doing very well, it evidently wasn't enough to salvage Square Enix's bottom line.