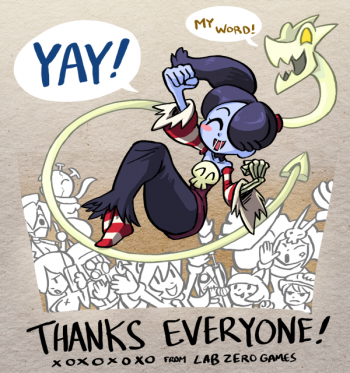 The Skullgirls IndieGogo crowdfunding campaign has now reached the $600,000 mark, which means three new characters will be added to the game.

The Skullgirls IndieGogo crowdfunding campaign is a heartwarming story of a community that really cares about the game. It raised its initial funding goal of $150,000 in a record-breaking 22 hours, and has gone on to raise over $600,000 in the following weeks. This means that developers Lab Zero Games will be adding three new DLC characters to the game, with the first, Squigly, to arrive with the PC version of the game in July.

"We expect Squigly to be released alongside the PC version of the game, most likely in mid-July," Lab Zero CEO Peter Bartholow told Siliconera. "Big Band and the Mysterious Character should appear 3-4 months apart from there." Squigly, Big Band and the Mysterious Character were unlocked at the stretch goals of $150,000, $350,000 and $600,000 respectively. A recent update announced that if the campaign reaches $725,000, Robo-Fortune will be upgraded from a mere voice pack into a full-blown, playable character.

Bartholow also said that work on the PC version of the game was already underway. It is being developed in-house by Lab Zero and will be published by Marvelous AQL. Bartholow says that Lab Zero is aiming to kick the beta off in mid-June, with a full release to follow in mid-July.

Skullgirls developer Reverge Labs faced accusations of sexism before the female-only fighter was first released. The lead developer initially dismissed the complaints, saying that scantly clad anime chicks with huge breasts aren't offensive because it was a woman who animated them. Big Band will be the first male character for Skullgirls, and the Mysterious Character may also be a male, depending on which character receives the most votes.

There's only 25 hours left (at time of writing) to contribute to the IndieGogo crowdfunding campaign. A contribution of $36 or more grants you a cd-key for the Steam version of the game (when it is released).

Update: The campaign has now hit $750,000, meaning that Robo-Fortune will be upgraded from a voice pack into a full-blown, playable character, bringing the total of new DLC characters from three to four.

Update 2: And it's over! The campaign raised a grand total of $829,829! Lab Zero announced a final stretch goal of $825,000 in the final hours of the campaign, which as it has been reached, means a second mystery DLC character will be added to the game! This brings the total of new characters up to five.