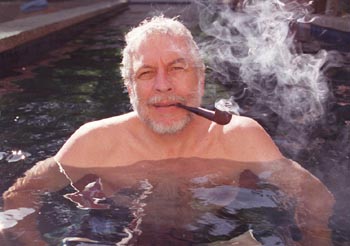 Nolan Bushnell sees big things for the future of gaming, but videogames designed specifically for mobile platforms are not one of them.

In a newly-published interview with AllThingsD ostensibly held to promote Busnell's new book Finding The Next Steve Jobs, the Atari co-founder (who is arguably even more famous as one of the people behind the moribund Chuck E. Cheese line of restaurants) discusses the most impressive upcoming projects in the world of gaming. He cites the Oculus Rift VR headseat and Google's Google Glass project as important new ventures, but then slams the mobile gaming space.

"I think the next big game opportunity is [Google Glass]. If I told you all my ideas for it, I'd have to kill you. And the Oculus Rift," Bushnell states. "The game business reinvents itself every five years. The last five years have been the days of mobile gaming and shortform gaming, exemplified by Rovio with Angry Birds and Zynga with FarmVille. And that is over."

When asked to elaborate, Bushnell claims that the novelty of mobile gaming has simply run its course. "Most games, by their nature, have a half-life of two years or less," he says. "It's the outlier that has a half-life that's longer than that."

"But that doesn't mean that the marketplace is synchronized. So you have the early adopters coming into something, and they soon encourage the more timid to come in. It broadens the group. But players' engagement is not lengthened."

In more practical terms, Bushnell sees the current mobile platforms as quickly becoming oversaturated with too-similar products. "Do I really want to do a mobile game that's one of 300,000, where discoverability is everything? You really have to have a little more sizzle on the steak. I would rather be one of 100 apps for Google Glass than one of 300,000 for iOS and Android," Bushnell adds.

While there are certainly many people who would disagree with Bushnell's sentiments - all of the people employed by Rovio and Zynga, for instance - even a cursory glance at the Android or iOS app stores would seeming support his claim that the mobile space, while initially lucrative, has become overwhelmed by developers attempting to cash in on the latest fad en masse. If you have a smartphone handy, run a search in either of those stores for the term "craft" and let me know how many blatant Minecraft rip-offs you find. The same goes for terms like "war," "duty," and "combat." You can't fault small-time developers for leaping at the promise of quick cash, but this deluge of me-too games has diluted the mobile gaming space to the point where it's almost impossible to separate the wheat from the poorly-coded chaff.

If there's a silver lining to all of this, it's that history already offers a template of how this may inevitably play out. Bushnell's own Atari Corporation was largely responsible for a similar oversaturation in the console space in the early 1980s, which lead to the videogame crash of 1983. Fortunately for our collective pastime, Shigeru Miyamoto and his colleagues at Nintendo came along shortly after and introduced a certain mustachioed plumber whose popularity sparked a resurgence in the home gaming industry, and once Nintendo had installed strict regulations on which games could and could not appear on the platform, the console business was free to grow into the multi-billion-dollar industry it is today.

Can the same happen in the mobile space? That's anyone's guess, but at the rate the segment is going, an Atari-esque crash seems almost inevitable.