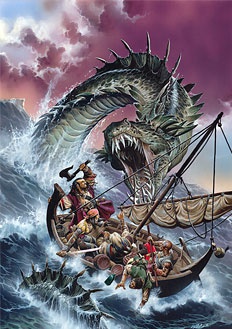 One of the most vibrant fantasy settings created might be coming to a Pathfinder table near you.

There's only a few days left to make sure a high quality RPG product gets published. No, I'm not talking about some bigtime computer RPG reboot like Torment or something from Richard Garriott. I mean a real tabletop role-playing game you play with your friends and some polyhedral dice. Designers have created all kinds of packaged settings over the years for GMs to use to entertain their players like Dragonlance or Planescape, but none have the panache and flair of a gritty pirate city like Freeport. Even though Freeport: City of Adventure has been released for all kinds of RPG rulesets in the past, it's a perfect fit for Pathfinder, often called D&D Edition 3.75. The Kickstarter to raise $50k to publish a full color, 512 page hardcover detailing everything about the setting for Pathfinder is in its last few days, and it's in danger of failing. I wanted to make sure all of the RPG fans on The Escapist knew about it.

Published by my friends at Green Ronin, Freeport isn't for the weak at heart, and that's why I love it. "You know those fantasy settings with benevolent kings, noble knights, and pretty unicorns? Yeah, that's not Freeport," said designer and publisher Chris Pramas. "It's a grim and gritty setting, with sea dogs, gangs, cutthroats, cultists, and a healthy dose of Lovecraftian horror. You don't want to raise your kids there. You don't want to retire there. But you sure as Hell want to adventure there!"

I certainly do. I've been lusting over the delicious descriptions of life in the city founded by pirates. It's got all the things I enjoy in a fantasy setting, from adventure hooks that scream for players to investigate them, to a sense of history and humor you don't commonly find in speculative fiction.

Kickstarter has done wonders for videogames, but it's been really lucrative for small publishers of tabletop games as well - just on a much different scale. To design and print a book like Freeport: City of Adventure for Pathfinder, Green Ronin has to front all of the cash it takes to design and lay out the text, hire artists to create the interior illustrations, and pay the printer. Because of the risk involved, publishers usually have to cut corners, and print in black & white or cut chapters to reduce printing costs.

"One of the great things about Kickstarter is that you can try to do the project you always dreamed of," Pramas said. "Our older Freeport books were done with budgetary constraints. This time I wanted to go balls to the wall: a 512 page full color hardback! That meant a high initial goal but I didn't want to mess around. This is the book I want to do and I hope fans want it too."

Check out the Kickstarter page for Freeport: City of Adventure for Pathfinder for more information.