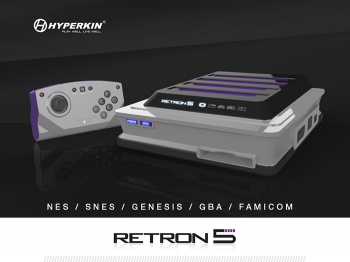 The console is capable of playing NES, SNES, Sega Genesis, Game Boy Advance and Famicom cartridges of both PAL and NTSC format.

Love playing retro games from the NES and SNES-era, but are sick of having all those consoles clutter up your living room? Or maybe your new-fangled HDTV is struggling to deal with the decades-old machines? Hyperkin has you covered, announcing the RetroN 5 retro-gaming console. The console can play games designed for the NES, SNES, Sega Genesis, Game Boy Advance and Famicom (Japanese NES). It can play games from both PAL and NTSC regions, and supports HDMI output with up to 720p resolution.

Just as the GBA supported Game Boy Color and Game Boy games, and the Genesis supported Sega Mega Drive games, so to will the RetroN 5. Super Famicom (Japanese SNES) games will also work in the SNES slot. This means the console can play games from nine different systems. The Famicom slot is the latest addition to Hyperkin's line of RetroN consoles, with the company stating that "we found that we could incorporate one more cartridge slot without hindering our current developmental cycle."

Six controller slots line the sides of the console, supporting controllers from the NES, SNES and Genesis. As well as being able to use any controller for any system (for example, you can use a SNES controller to play Genesis games), the RetroN 5 comes with its own unique wireless controller. The new controller has a Microswitch Directional Pad instead of a traditional directional pad.

The console also supports save states for games of every system. This means that you can save your game at any point in time by accessing the console's main menu. The console also autosaves your progress whenever you shut it down.

Hyperkin says that the RetroN 5 does a great job of tidying up the sounds and visuals of the games it plays. It supports both standard 4:3 and widescreen 16:9 aspect ratios, and makes use of audio interpolation for a smoother, cleaner audio output.

Hyperkin has offered no news of when the new console will launch, or how much it will cost.

Gallery of the Day: 8 Nintendo Consoles That Will Have You Dreaming of Mario DrStrangelove 12 Comments
Comments on