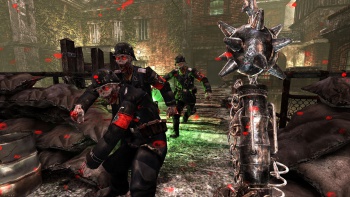 One of the best features of the original Painkiller was its impressive range of varied environments. Being set in Purgatory, the game's designers could choose any historical setting, add a few demonic adversaries, and cut the player loose to destroy its world. Nordic Games seems to be continuing this tradition using Painkiller Hell and Damnations's DLC packs: After the medieval focus last January, a newly revealed Zombie Bunker set pits Daniel against the zombified armies of the 20th Century, including some familiar undead Nazis.

Zombie Bunker is largely a single-player release featuring three levels of zombies, demons, and new bosses. First up is the remake of Painkiller's Leningrad (now called Stalingrad), altered to include deployable zombie allies and enemy aircraft. A second remake, Military Base, now features Space Commandos, nuclear weapons, and a UFO boss fight. Finally, players can raid "The Bunker", an original map by Nordic set in a 1940s raid shelter. The pack is rounded off with a multiplayer map for all gameplay modes, the melee-based Morgenstern weapon, and an Armor Regenerating Tarot Card.

Having zombies in videogames may be old hat, but the opportunity to tear through them in a high-definition Painkiller could be fun nonetheless. Zombie Bunker is slated to launch sometime on March 29th through Steam's digital platform. Xbox 360 and PS3 users will have to wait until Painkiller: Hell and Damnation's console release, which has reportedly been pushed back to June 8th in North America.