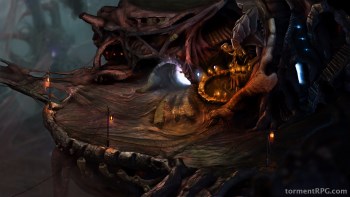 InXile Lead Environment Artist Koy vanOteghem also talks a bit about the advantages of developing and playing games in two dimensions rather than three.

The first Torment: Tides of Numenera screen was revealed today via Kickstarter update, and it certainly looks "Torment-ish" - which is to say, organic, shadowy, weird and something that would be not at all out of place in the great Planescape: Torment. A good first step, in other words.

It's considerably different than the three-dimensional ways of games like Dragon Age, however, and while that may seem a bit dubious to some of you whippersnappers out there, vanOteghem said that pre-rendering environments in two dimensions, which was the norm in the pre-Neverwinter Nights era, will hopefully allow the team to "strike a distinct style while achieving levels of detail often difficult to present in 3D game space."

"The big debate: playing games in 2D vs. 3D - I know many of you are interested about our decisions regarding the art direction. There has been much talk about the costs associated with '2D development,' the quality and scope that can be produced by a small team, and the impact that this might have (for funding) of other departments," vanOteghem explained in the update.

"To be clear, what we are really talking about here is not a 2D game, but what you might call a 2.5D game, with just a portion of art production that is 2D in nature. Bear in mind, any extra time we spend noodling in 2D will be made up 10-fold when we get to our beta build and we are not ripping our eyes out trying to figure out how to get all that geometry to render efficiently on screen," he continued. "Our early tests are showing very promising frame rates for our 2D assets, freeing up additional processing power for characters, FX, lighting, post-processes, etc."

While much of the art is 2D, characters are being rendered in 3D, and vanOteghem said that although he was concerned about lighting in the early stages, he's now confident that dynamic lighting and shadowing can be used very effectively in the game's environments. "These issues, among others, simply require a mind shift in the creation process, and it's quite liberating," he wrote.

Here's a link to the screen in all its full-sized glory:

I have to admit to being a little surprised by the concerns over pre-rendered backdrops. I am old and therefore tainted by decrepitude, but I can't think of any 3D-rendered isometric RPG (which is admittedly a fairly narrow field) that has matched the sheer beauty of "hand-painted" games like Icewind Dale, Temple of Elemental Evil and of course Planescape: Torment. Perhaps I'm missing some vital technical point, but to my mind - and to my eye, thanks to this screenshot - the decision to opt for 2D backgrounds is solid.