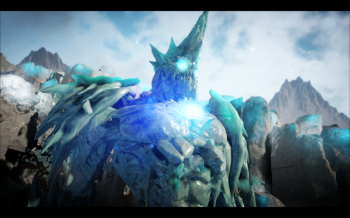 Mark Rein, vice president of Epic Games, says "[the PS4] is a phenomenal piece of hardware and we're going to do amazing things with it."

Chances are you've played somewhere between one and ten games that run on Unreal Engine 3. The engine has dominated the current console generation, providing the inner workings for smash hits like Bioshock, Gears of War, Dishonored and Batman: Arkham Aslyum. So when the vice president of Epic Games, the folks behind the Unreal engine, is impressed with the hardware of the PS4, it's a good sign, as we are sure to see numerous games in the upcoming console generation built on Unreal Engine 4.

When asked if he got what he wanted with the PS4, Rein replied "Yeah, we're really pleased with what we got - at least so far from Sony. Tim Sweeney is really the best person to ask that question but he's over the moon with it." He explained that it is really important for next-gen consoles to use off-the-shelf PC parts, as it makes it much easier for developers to make games for it. "It's a smart thing to do. They're going to benefit from it - there won't be that whole 'how do we make this work', there's just going to be 'wow, what can we do with this?' And we'll do great things."

Rein says that it is "abundantly clear" that the PS4 is being developed as a collaboration between Eastern and Western philosophies. Sony, a Japanese company, has traditionally developed their PlayStation consoles first and foremost for Japanese developers, much to the disdain of Western developers looking to create cross-platform games. He expects the next generation of consoles to exhibit a high level of convenience. "To have [convenience] combined with amazing hardware specs that everybody will have, at I'm sure will be a reasonable price... it will be good for everybody."

Fortnite will be the first Unreal Engine 4 title to be published by Epic Games. Rein hesitated to offer up more details of the zombie-survival game, but assured us that "It's because it's so good that we're going to take our time with it, then we're going to have a very slow rollout of it, get a few hundred people to play it and do cool things. It's got such a long lifespan that we just don't want to rush it."