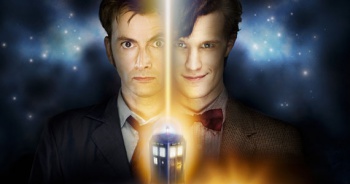 Fan favourites David Tennant and Billie Piper will reprise their roles as the tenth Doctor and Rose Tyler in the upcoming 50th anniversary Doctor Who special.

Steven Moffat, the lead writer for the show, stated that the special will be shot in 3D, with frequent Who director Nick Hurran behind the helm. The special will feature the Zygons, a race of shape-shifting extraterrestrials. The Zygons were previously featured in the fourth Doctor episode, "Terror of the Zygons" - which presented the aliens as malevolent refugees bent on conquering Earth after a stellar explosion destroyed their home planet.

Doctor Who fans might remember that the last time we saw the tenth Doctor, he created a half-human half-time lord clone of himself and sealed him away in a parallel dimension with companion Rose Tyler. It's highly likely that the 50th anniversary storyline will take place in the parallel universe, as it's the only logical explanation that would see both Smith and Tennant appearing alongside each other (as well as the appearance of Rose).

Moffat had this to say regarding the special:

Freema Agyeman (Martha Jones) and John Barrowman (Captain Jack Harkness), previous companions of the tenth Doctor, have stated via twitter that they won't be returning for the special. The Royal Mail recently rolled out a collection of Doctor Who Stamps to mark the 50th anniversery of the show.