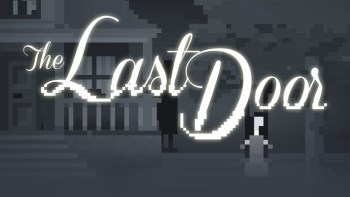 The Last Door is an 8-bit point-and-click horror adventure with a powerful Lovecraftian bent, and the first episode is now ready to play.

The Last Door did its thing on Kickstarter at the end of 2012, easily exceeding its very modest goal of £3,852 ($5830) in a mere 30 days. And now, a mere 100-ish days after that, the first chapter of the episodic horror webseries is live - and, more importantly, actually quite good.

The game is set in 1891, following the receipt of a letter from an old friend that leads to a visit to his family mansion, where strange, unsettling things are afoot. The visual style is very heavily pixelated, to the point that character faces are just featureless beige blocks, but the animation is smooth and the backdrops, despite the chunkiness, are quite lovely. And it soon stops mattering anyway, because the story, a dark mystery spurred by suicide, very quickly takes priority.

Chapter one of The Last Door is short, requiring probably no more than an hour to complete if you don't dawdle excessively, and not terribly difficult either; there are relatively few inventory items and their uses are generally fairly obvious. But it makes excellent use of music and audio cues, and while it's neither as startling as Slender: The Arrival nor as pedal-to-the-metal horrific as Amnesia, the atmosphere is decidedly disturbing and translates to a web-based point-and-click experience better than I expected.

The Last Door is open now to Kickstarter backers, and if you missed that train you can still pay for admittance by way of a donation toward future development in the amount of your choice. Alternatively, you can wait for the release of the second chapter, currently planned for sometime in May, at which time the first chapter will be opened to everyone at no charge.

A playable teaser is available if you just can't make up your mind, but however you go about it (and I'm of the opinion that it's worth at least a couple bucks), The Last Door is definitely worth a look if you're into the horror and/or point-and-click adventure thing. You may take said look at thelastdoor.com.