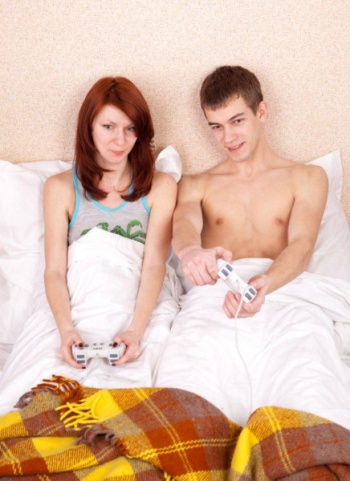 A recent study has found correlations between your gaming and all the fantastic sex you might be having.

As gamers, there are a variety of reasons why you might prefer one console over another. Perhaps you enjoy the exclusive titles, or favor a particular hardware feature. What you probably don't think about is its bearing on your sex life, because while sex and gaming aren't mutually exclusive, they normally don't require each other either. Yet that's exactly the purpose of a survey that polled 1,747 participants on the sexual performance of their gaming partners. It's not hard-hitting science, but the results make for an entertaining read, especially if you're an Xbox 360 owner learning that you ended up on top (so to speak).

The study, sponsored by Voucher Codes Pro, was conducted in the UK to evaluate external influences on relationships. Participants were asked to name their partner's most-played gaming system before ranking sexual performance from "Excellent" to "Below Average". According to the results, half of the unwitting gamers were considered "Good" or "Average", while 54% of Xbox 360 players were "Good" or better. In fact, 22% of Xbox-supporting partners obtained the highest possible ranking for being total freaks in the sheets.

"So, according to our survey, it seems that if you own an Xbox 360, you can give yourself a pat on the back for bedroom performance," said Voucher Codes Pro's George Charles. "Well, one in five of you can at least. For other gamers it definitely seems there's room for improvement. And despite it being an undeniably good game, perhaps Bioshock Infinite doesn't act as a natural performance enhancer!"

Assuming you don't own an Xbox 360, what does the study say about your sexual performance? First of all, Wii players can relax, since they were actually a close second behind the 360. The lowest performances, interestingly, were awarded to none other than PC gamers. Only 3% of gaming's Master Race were especially proficient at bumping uglies, and their above-average figures didn't fare much better. On the bright side, 52% of gamers strike a good balance between their sexual and gaming needs. That said, 11% of participants thought their relationship needed less sex and more gaming.

In case it wasn't clear, these results probably shouldn't be taken very seriously. Charles even notes that the definition of "bedroom performance" is wide open to interpretation, which means the study doesn't cut the mustard where scientific accuracy is concerned. In other words, your gaming hobbies probably don't have anything to say about your sexual performance that you aren't already aware of.

Unless you're a games journalist that is; everybody knows belt buckles just undo themselves when one of us enters the room.