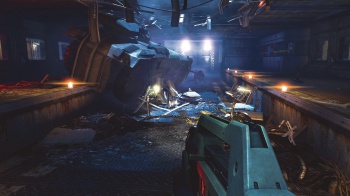 It's time for another round of "game over!" jokes.

Gearbox President Randy Pitchford claimed in May 2012 that the Wii U release would be the "best-looking" version of the game, but that statement was made prior to its spectacularly disastrous launch. More recently, he said simply, "We'll see," when asked whether the game would make its Wii U release date, adding, "That's not our call. I think [developer Demiurge Studios] did amazing work. I think it's really cool, but Sega's got to figure that out."

The decision to pull the plug on the Wii U release probably won't come as much of a shock to anyone. Colonial Marines has a sub-50 Metacritic score across the Xbox 360, PlayStation and PC platforms, and slightly enhanced visuals and a funky control scheme only goes so far in compensating for a fundamentally bad game.