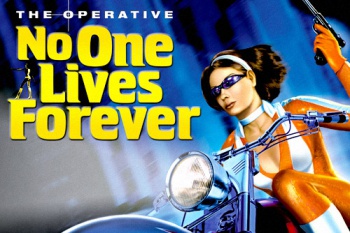 Ever wondered why this FPS classic never saw a Steam re-release? Its because no one knows who has the rights to it.

Do you remember No One Lives Forever? No? Then shame on you. This quirky little FPS was developed by Monolith, the studio that brought us 2001's Aliens Versus Predator 2 (the good one). It starred special agent Cate Archer (a woman as a main protagonist! Scandal!) and had a very cheesy Sean Connery-era James Bond kind of style. It was very well written, with plenty of lowbrow stereotypes combined with a dash of social commentary, and it played pretty well too. So why is it, and its sequel, nowhere to be found? It hasn't seen a Steam re-release, and even Good Old Games doesn't have a listing for it. The reason is because someone lost the rights for it. As in, they can't figure out who actually owns them.

Cate Archer's disappearing act begins when NOLF's original publisher Fox Interactive was bought out by Vivendi Universal back in 2003. Vivendi was Blizzard Entertainment's parent company, which eventually went on to become the Activision Blizzard we all know and love. Logically, the rights to No One Lives Forever should be buried somewhere within the vaults of every other franchise Activision has gobbled up and left for dead. But they aren't. Activision community mastermind Dan Amrich explains:

"The person who I normally talk to about that stuff does not believe that we currently have the rights. They've never seen it. They've never been given the permission to put that stuff on Good Old Games. They basically said, 'If we had it, I would love to have been able to reissue those games.' At this time I do not believe Activision has the rights to No One Lives Forever, so if there were to be a reissue or remake or something like that, it wouldn't come from Activision. I don't know what the future holds for No One Lives forever, but I don't think that that future involves Activision."

Ok, so Activision don't own the rights. Developers Monolith are still alive and kicking, pushing out the wild and wacky Gotham City Imposters early last year. Indeed, No One Lives Forever is listed on their official website. But it looks like they don't have them either. "I contacted a friend at Monolith, and he doesn't know [who has the rights]," said Amrich.

All of this means that there is no legal way for anyone to obtain these fantastic games anymore, sort of tracking down a boxed copy of the decade-old game. The rights have vanished into the night. I hope they find them soon, because Cate Archer's girl power silliness might be just what the industry needs, in face of all the super serious bromance slugfests going on these days.