"Two postage stamp-sized images of gay sex," are enough to knock a comic off the app store. 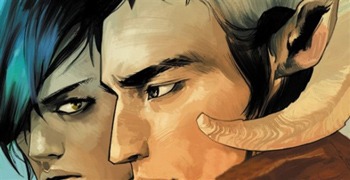 Update: Apple did not ban the comic from its stores. That decision was made internally at Comixology. Read more here.

With the possible exception of Locke and Key, Brian K. Vaughan and Fiona Staples' Saga is the best thing happening in comics right now. It's a heady mixture of high adventure, classic fantasy, space opera surrealism and the same biting humor that Vaughan brought to Ex Machina and Y: The Last Man. It's good, go read it.

But not on any of the comic portal apps available on iOS, as Apple is banning the series' twelfth issue from sale on the grounds that it contains "two postage stamp-sized images of gay sex." At least, that's the story according to a recent announcement from Vaughan.

For reference, Saga's first line of dialogue is, "Am I shitting? It feels like I'm shitting," part of what is eventually revealed to be a relatively graphic childbirth scene. One of its central characters is the bisected phantom of a teenage girl, complete with hanging ghostly intestines. In issue four, a character visits "Sextillion," an absurdly over-the-top "pleasure planet" complete with multi-breasted centipede hookers, phallic architecture, evil pedophile aliens. Oh! And (NSFW) gay sex (NSFW) In short; It's an adult series, for adults. Yet this is the first issue to run into trouble with Apple's content policies.

So what can you do to get around Apple's moral defense shield? As Vaughan puts it:

1) Head over to you friendly neighborhood comics shop and pick up a physical copy of our issue that you can have and hold forever.

2) While you're at it, don't forget to support the Comic Book Legal Defense Fund, which helps protect retailers who are brave enough to carry work that some in their communities might consider offensive. You can find signed copies of Saga at the CBLDF site right now.

4) If all else fails, you might be able to find SAGA #12 in Apple's iBookstore, which apparently sometimes allows more adult material to be sold than through its apps. Crazy, right?

Also, if you're a Comixology user, you can likely purchase the comic via the non-Apple web interface and have it show up on your iPad when you sync your purchases.

Point number four is rather relevant, as Apple is rather open about the low regard in which it holds every medium that is not literature or music. To quote the company's App Store submission guidelines:

We view apps different than books or songs, which we do not curate. If you want to criticize a religion, write a book. If you want to describe sex, write a book or a song, or create a medical app. It can get complicated, but we have decided to not allow certain kinds of content in the App Store.