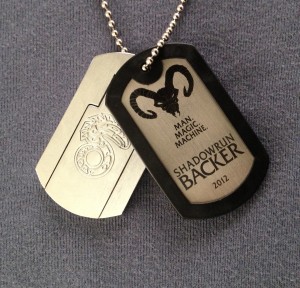 Shadowun Returns, is a cyberpunk fantasy tactical role-playing game under development by Harebrained Schemes, an indie game publisher led by Jordan Weisman, the original creator of the Shadowrun tabletop role-playing game. As of writing, its Kickstarter has raised an impressive $1.8 million of its initial $400,000 goal, and Harebrained Schemes has posted a huge information dump on its Kickstarter page. Details revealed include the game's release date (June), as well as information on the collector's edition and future DLC.

The team released some pictures of the collector's edition dog tags and DocWagon cards and they look pretty badass.

DLC plans for the game were also detailed:

Backers and collector's edition pre-orderers will get the Berlin Campaign at no charge. Any further DLC developed after launch will require payment.

The game will be available through Steam for PC, with pre-orders opening on April 29th. This means that the only way to get the collector's edition is through Harebrained Schemes' official website.