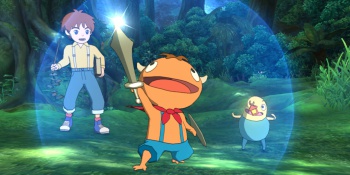 The people behind Ni no Kuni: Wrath of the White Witch and the Professor Layton series are working on a new game for the PlayStation 4 (and that's roughly all we know about it).

In a recently-published interview with Japanese website Nikkei Trendy (translated by Gematsu), Level 5 head Akihiro Hino offered up some exceedingly vague information on what the developer is currently working on. "It's still in the planning stages, but we are ... working on a PlayStation 4 title," Hino states. "We might be able to announce it soon."

As to why the company would opt for Sony's so-new-it-doesn't-even-exist-yet machine for its next project, Hino expresses notable excitement over the console's online functionality - an unexpected revelation, given that Level 5 is known primarily for singleplayer adventures.

"PlayStation 4 is next-gen hardware built with the network in mind, so more than graphics performance and specs, we need to think about communication - how to use the network features," Hino says.

Does this mean that Level 5 working on a title that heavily features online multiplayer? Maybe, but it could just as easily mean that Hino and co. are looking to expand their traditionally singleplayer-focused epic adventures with novel features that rely on certain aspects of the PlayStation 4's online connectivity. Not necessarily the network infrastructure itself, but perhaps this new game uses asynchronous online features to alter an otherwise singleplayer game. Think: Dark Souls, wherein players could scribble notes on the game's walls and floors that would then appear in other players' games via the title's otherwise invisible online feature set.

Of course, that's all just speculation. We don't know anything concrete about Level 5's next game beyond what Hino said in this interview. That said, we generally adore everything the developer puts out, so here's hoping its next grand adventure will utilize the PlayStation 4 in an interesting fashion.