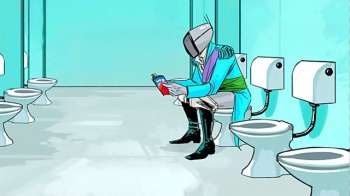 Someone's still being inconsistent when it comes to depictions of sex, but it ain't Apple.

Here's an awkward situation to be in; I, and a handful of other journalists floating around the nerd sphere, owe Apple an apology. Contrary to earlier reports and the claims of writer, Brian K. Vaughan, Apple did not ban, remove or censor Saga #12. According to a recent announcement from Comixology, the decision to withhold the comic from sale on Apple channels was made internally. I did have a big fat "according to" in the middle of my original piece, but like many, I took Vaughan at his word ("Unfortunately, because of two postage stamp-sized images of gay sex, Apple is banning tomorrow's SAGA #12 from being sold through any iOS apps"), and it appears he was either lying or misinformed. I'm sorry for perpetuating a bogus story.

To our customers -
In the last 24 hours there has been a lot of chatter about Apple banning Saga #12 from our Comics App on the Apple App Store due to depictions of gay sex. This is simply not true, and we'd like to clarify.

As a partner of Apple, we have an obligation to respect its policies for apps and the books offered in apps. Based on our understanding of those policies, we believed that Saga #12 could not be made available in our app, and so we did not release it today.

We did not interpret the content in question as involving any particular sexual orientation, and frankly that would have been a completely irrelevant consideration under any circumstance.
Given this, it should be clear that Apple did not reject Saga #12.

After hearing from Apple this morning, we can say that our interpretation of its policies was mistaken. You'll be glad to know that Saga #12 will be available on our App Store app soon.
We apologize to Saga creator Brian K. Vaughn and Image Comics for any confusion this may have caused.