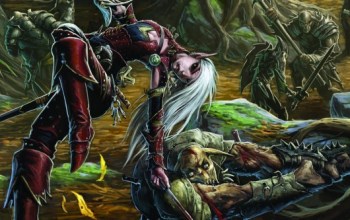 Some of the "signature spells" of the Pathfinder tabletop RPG will function differently in the upcoming Pathfinder Online but Goblinworks CEO Ryan Dancey says that's the only practical way to keep them in the game.

Adapting tabletop RPG rules to the online world can be a tricky business. What works in one medium doesn't necessarily fly in the other, but leave too much on the cutting room floor and you risk alienating long-time fans who come to the game with certain expectations. Fortunately for Pathfinder Online studio Goblinworks, most of the potential trouble associated with Pathfinder magic is limited to "just a handful of spells and effects" like Fireball and Lightning Bolt, and while it's not exactly an easy job to make the required changes, it's worth the hassle in the long run.

"For the flashy big damage spells we'll make modifications to the way they work to keep their power constrained so that they don't become overpowered. That means that we'll limit the number of such spells that can affect a target in a short period of time, and limit the amount of damage that they can deliver," he said in an interview with Warcry. "That requires a lot more alteration to the basic game mechanics from the tabletop, but the value in keeping signature spells in the game outweighs (in our opinion) the downside of making them work differently."

He added that there are certain "game breaker" spells, like Polymorph and Locate Object, that definitely won't be included in the game, and others, including Dominate and Disintegrate, that are still up in the air. "We'll be carefully picking and choosing what spells go into the game in close collaboration with the community as a part of the process of design we call Crowdforging," he said. "I'm sure that we'll have more than enough interesting magic to keep everyone happy without stretching the game design to the breaking point."

The "fantasy sandbox MMO" Pathfinder Online wrapped up a successful $1 million Kickstarter in January and it currently expected to begin beta testing sometime in 2014.