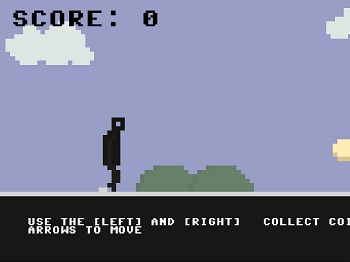 The free bundle features parodies like Thirty Flights of Loathing and World of Glue.

Bundles aren't simply "in", they've become an important part of indie gaming. Pippin Barr, a professor of the Institute of Digital Games at the University of Malta, has released his take on the bundle. Entitled the Mumble Indie Bungle, it has five games with oddly familiar titles like World of Glue, Gurney, Spy Parity, Proteas and Thirty Flights of Loathing. As a chaser, the bundle includes the IFG* winner Carp Life. While the parodies are free, Carp Life is whatever you want, "so long as it's not nothing".

Barr's done parody before with the unwinnable flash title Ancient Greek Punishment. As he explains on his blog, the games are supposed to be "crappy indie games that someone perhaps bought for you, mistaking them for the originals". It's like the The Asylum, but for games.

Instead of parodying real games, the Mumble Bungle games are literal interpretations of misheard titles. Barr states that he started with the names and worked backwards from there. Along the way he had to toss out two games, Subpar Meat Boy and Flour because he just couldn't make the games work.

Lovingly rendered in Atari-esque styles, the games are all short jokes, but not always what you'd expect. Spy Parity in particular is a splitscreen game where you can only move the two characters in equal, but opposite, directions. Or Gurney, where you have to type out bible verses while being rushed down a hospital hallway, but the words never quite come out right and everything's blurry. And Thirty Flights of Loathing... well that's pretty self explanatory.

The Bungle can be downloaded here.