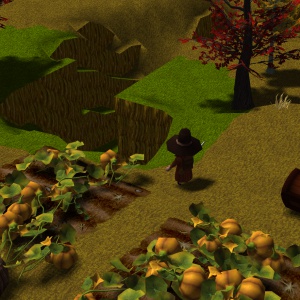 "Save points are the bane of good gaming, and they lead to a very hand-held type of experience with 'success' nigh-on guaranteed for the player," says Björn Johannessen, Lead Designer of Salem.

Salem is a quirky little MMO about being a settler in the new world. As the name implies, there is a lot of mystical-Cthulu-witchcraft-occult stuff, so if you misstep you could find your character dead. Permanently. Lead Designer Björn Johannessen spoke to WarCry about the permadeath feature, as well as how modern games have become way too easy. "I feel that a game without a proper 'You lost!' state is more of an interactive movie than a game proper," said Johannessen, discrediting perhaps the majority of MMOs out there as not being "proper games."

Johannessen feels pretty strongly about permanent death in Salem. "It was always intended to be a means of conflict resolution with finality, as well as establishing a definitive fail-state for the game," he said. "In a context where players can establish competing claims on limited resources, conflict resolution becomes important." When asked to clarify his statement about games without permadeath not being proper games, he said:

"I wouldn't speak disparagingly of someone else's baby. It's more of a general trend in modern gaming than an issue I have with any particular title. I grew up with the old generation of NES and Amiga games - often times repackaged arcade games - that made you play through the entire game again from level one and scratch if ever you failed, lost the three lives you did have, or whatever, even if you had made it to the proverbial final boss. No save points, no anything."

It looks like he is definitely angling for the "old-school" market, but is that big enough to sustain an MMO? Diablo III's hardcore mode, which allows permanent death, is played by a much lower percentage of players than its normal mode. Not content with just calling out developers that allow players to actually continue playing the game after dying, Johannessen said "Save points are the bane of good gaming, and they lead to a very hand-held type of experience with 'success' nigh-on guaranteed for the player," discrediting pretty much every video game ever made after 1988.

Johannessen also feels that PvP is an integral component of MMOs. "I much prefer multiplayer games in general for that reason, because where a single-player campaign may fail to deliver, at least multiplayer always offers actual resistance from someone who is actively trying his best to beat you," he said. "In my opinion, that is kind of the essence of what a game is, and also what separates it from a movie," implying that games without PvP are simply "interactive movies" rather than actual videogames.

The deadly combination of PvP and permadeath point towards Salem being a very, very hardcore game. The advantage of this for the developer is that they don't really have to develop an endgame, which is traditionally where the majority of new content lies in an MMO, as players will just keep dying and restarting. The game is due out some time in Q1 this year, and will be free-to-play.